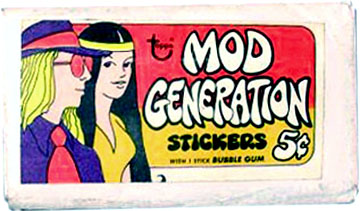 NOTE: There are 55 stickers in this series. #10 is still an unidentified mystery. Twenty-seven of them were designed and painted by Norman Saunders, and the remaining 28 were created by Trina Robbins, who was a West Coast underground comic book artist. The set was created at a time when kids were gaining interests in the counter-culture and losing interest in the old Topps formula for kiddy trends. Trina Robbins was assigned the freelance art job to design hippie characters for this set. Her original work was done with colored magic markers on paper. Her finished drawings were not considered appealing enough for publication. Of the fifty-five images in this set twenty-seven were handed over to Norman Saunders to make improved final paintings. As usual, Norm used significant creative liberties to redesign his characters, and in most cases his finished paintings make specific references to actual people in the Saunders family circle, most of whom were East Coast hippies at that time. Norm created recognizable portraits of his son, David, who appears in the set as "TEDDY" and his daughter, Zina, who appears as the inappropriately named "RICHARD." As Spiro Agnew often said in those polarized days, "No one can tell the boys from the girls!" Unfortunately the names were assigned by some mastermind in Ben Solomon's office, so Norm had no control over the names. The revised set was still not considered appealing enough to be a hit with kids who were saving their allowance to buy "Head Comics," so the artworks were again revised to include a black cartoon outline to make them more like the popular style of underground comic artist, R. Crumb. [Crumb had previously worked for Topps in 1965 on the Monster Greeting Cards series, but they could not afford him by this time.] A further revision was to redesign the card set as a sticker set, so each character was surrounded with a wide black border to facilitate a die-cut process. This phase of the project was handled by the underpaid graphic design staff of Ben Solomon. When Norman Saunders saw the final appearance of this set he was artistically disappointed with the decision to add the black cartoon lines and black die-cut borders. He felt these revisions ruined the visual appeal of the whole series. The test issue proved unpopular and it was not widely distributed, which makes the set very rare.