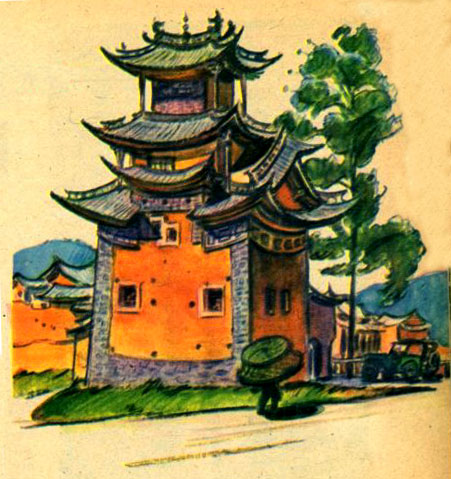 The coolie arrives with his grain basket at an ancient pagoda converted into a Chinese restaurant; 2,000 years plod patiently by our empty (for once) jeep.

What if it is 1945? The Chinese have an ever-fresh approach in the field of transportation. They employ anything with legs, the possible exception being ducks. A Chinaman considers himself no mean beast of burden either. With his entire family along and with his personal menagerie of bi- and quadrupeds loaded down, he trots off the market as unconcerned as a switch engine. The effect is that of a circus parade on a rollercoaster designed by a drunken Indian. 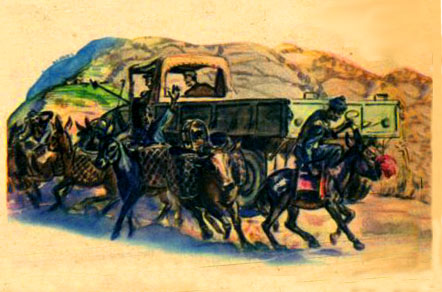 A "6x6" wins out over a native pack train. Only cattle wear the mounted cow bell (center foreground). These pack trains frequently stretch out for a mile.

It is only after traveling a hundred-odd kilos that you become conscious of the Road's distinguishing feature. Aside from the few short side roads which accomodate sundry military installations, it has no crossroads.

The entire length could be negotiated blindfolded. The consequences resulting from such a foolhardy act would make the experiment ill-advised.

The perverse pack trains of Mongol ponies, donkeys and cattle require the perfect coordination of all the faculties with which mankind has been endowed. And the prewar vintage vehicles of the Chinese Army are another omnipresent menace.

Alcohol and gasoline are the prime propellants, the accent being on the former, which serves in its usual dual capacity.

A single drink of it will convince anyone of its potency and superiority over gasoline. The exhaust fumes of a truck convoy with its exuberating effect upon the pedestrian traffic should clench the argument. 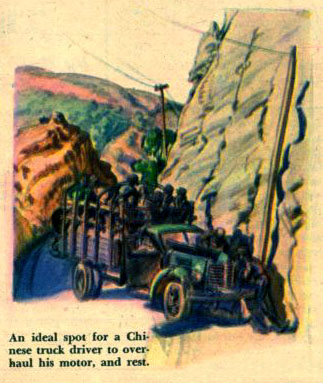 These rickety trucks, regardless of their fuel, are a menace at all times. One of them in full flight, gears disengaged and the fuel-consuming motor turned off, careening down a mountainside, is an awe-inspiring sight.

A parked vehicle along the Burma Highway is an open invitation to any living thing that possesses a thumb. Their conception of load capacity depends upon how many can hang on to how much. As a result of this practice the average truck resembles a mammoth cluster of almond-eyed grapes on wheels.

You can, if you are quick about it, dodge a runaway truck. A parked vehicle is unable to dodge anything. This observation serves only to spur drivers on in their particular brand of diabolical inventiveness in the matter of parking or stalling.

Just around any corner and centered in the road is a particularly favored spot. Better yet is the oblique or diagonal stall, which halts all traffic until some impatient driver comes to the victim's aid.

Who the victim is, in this instance, is debatable. 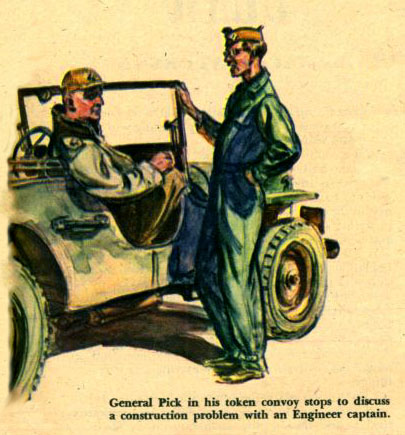 One thing about the twain is certain: this phase of the Burma Road is drawing to a close.

We found out a few days ago when for the first time we encountered an M.P. patrol.

Behind them stretched the first token convoy, with General Pick in the foremost jeep. I managed to catch one quick sketch of him while he spoke for a few moments with our captain. After which the convoy resumed its march to Kunming, to be followed mile after mile and day after day by those reassuring GI trucks, weapon carriers, jeeps, guns and ambulances.

With each passing vehicle you become more conscious of it. The twain have met, and the occidental is rapidly gaining equality.