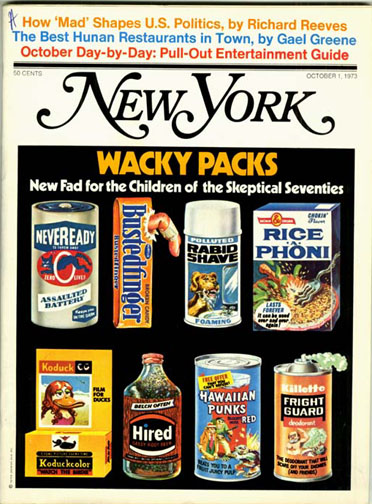 The WACKY PACKAGES was Norman Saunders' last major art project, and also his biggest popular success. He began them in 1967 with the "die-cuts" and he continued to paint them until the 16th series in 1976. Although, Norm created no new art for the "wackies" after 1978, the manufacturers continued to repackage Norm's artworks in various formats, even releasing some previously unreleased artworks, but the last Topps product with Norm's art was the Wacky Can Labels in 1980. The long history of the Wacky Packages has created a complex checklist, but it has also engendered the interest of many collectors, whose expertise was needed to compile a detailed checklist of all Wacky Packages. That research is a priceless resource for Wacky Collectors and anyone studying Norm's production during those last years of his art career. Rather than duplicating the extensive research of those specialists in this website, we invite you to visit another website that is specifically devoted to the history of the Wacky Packages, and to study their research results for yourself.