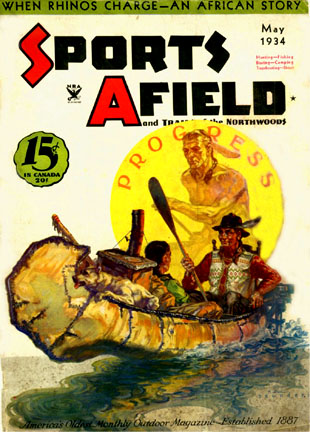 This article for SPORTS AFIELD appeared on page 39 of the May 1934 issue, with a cover painting by Norman Saunders. When Norm delivered the painting to the editor it was accompanied by a note of incidental comments on the significance of various details of his painting. The editor, Walter J. Wilwerding, who was Norm's former art teacher at the Federal School of Illustration, was so delighted with Norm's comments that he asked Norm to rewrite it as an article for the magazine.

Some Observations on Indians

Who Painted the Cover for This Issue

The "ugh, ugh, me heap big chief" Indian of the dime novel has gone the way of his cigar store prototype; the species is not only extinct but of doubtful origin to begin with. This fictional character went ughing and chugging through chapter after chapter in a manner that bespoke of nothing so much as a clogged carburetor. Today's Indian is far from a fictional character. He has adopted the white man's habiliments and habits: he dresses in ready to wear clothing, eats from a tin can, and sends his papoose to the public school to compete scholastically and athletically with the other students. It is this effort to adapt himself to our present day civilization, to assimilate a thousand years' progress in one generation without as yet having discarded his native habits, that affords us the incongruous picture he sometimes presents.

One such instance I remember: A young buck, leaving a general store dressed in new serge and beads, his moccasined feet kicking up no little dust and under his arm a shiny new pair of shoes that were never to see enough wear to dull the squeak. But give him some brass buttons or a uniform, anything from a Boy Scout's suit to a Knight Templar's regalia, and he'd sleep in it - that is if the chief will let him. This is unlikely if the Headman happened to be Big Chief Jim. He brooks no such insubordination, and takes it for himself, even if he has to patch it with a blanket to get it on. He doesn't worry about the back, as that is out of his range of vision.

Big Jim had the only cook stove in the tribe when last I saw him. Wherever you happened to see Jim the stove was not far behind. He toted, carried, lugged and paddled that stove all over the Lake of the Woods and back again, and I wouldn't be surprised if he takes it along to the Happy Hunting Grounds.

A housewife could hardly find room to fry a flapjack on that stove but Jim's squaw says "me roast deer on it." Talk about your portable stoves or your electric grill! This one didn't even need a light socket, ready to blaze away at any time and it usually did too, except when it was in a canoe. With half a score of paddlers of from three to sixteen summers, seated in the rear on the resplendent throne of a sawed off rocking chair sat Big Jim himself, surrounded by enough dogs and camp equipment to dim the humor of the funniest of New York Subway jokes.

The only real trouble Jim had was the growing scarcity of paddlers. The papooses grew up too fast, and there was only one way of beating the game. That's how come the outboard motor on the cover.