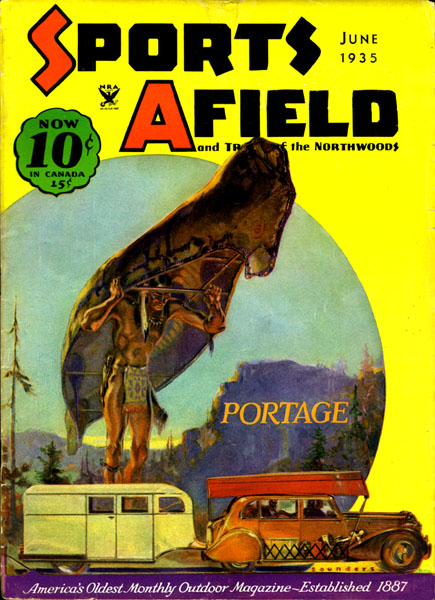 This article for SPORTS AFIELD appeared on page 51 of the June 1935 issue, with a cover painting by Normand Saunders. (Norm often added the distinguishing florish of this extra "d" to this signature around this time.) The editor, Walter J. Wilwerding, who was Norm's former art teacher at the Federal School of Illustration, felt the cover needed to be accompanied by a clarifying statement about the impractical method of storing the camping equipment depicted in the painting.

NORMAND SAUNDERS, who painted the cover of this issue and whose "observations on Indians" appeared in our May, 1934, number, is a young artist who is, in our opinion, "going places."

Much of his life has been spent on Indian reservations and, on a basis of that experience, he has painted many a strong cover for SPORTS AFIELD. As a student of Indian life he is entitled to considerable respect, more respect than he himself concedes to modern outdoor methods. In splendid fashion he catches the spirit of the Indian, but when he reproduces current sporting routine he becomes sketchy - symbolic rather than accurate.

The idea, the symbolism, of his painting for our June front cover, is well handled but he, like other artists within our experience, receives with derision our comments on certain technical features of this cover. If an outboard motor and other equipment of a 1935 "portage" served to strengthen the contrast, they have served their purpose - regardless of the sloppy method of carrying the motor, regardless of the use of the right (wrong) running-board for tackle which belongs in the trailer, regardless of other "trivial details."

All right, Norm - pardon us for mentioning these inconsequential uses of artistic license. It is still an attractive cover and a strong study in contrast.