EDITOR'S NOTE: Norman Saunders, one of the Guests of Honor at Pulp-Con #6, probably did more pulp magazine cover paintings than any other artist. By his own estimate, Mr. Saunders averaged from 75 to 100 covers per month between 1935 and 1942, and again between 1947 and 1953. That would mean he painted somewhere between 1,100 and 1,500 covers for the pulps! Pulp collectors have probably seen many of his covers without realizing whp painted them, since artists were frequently not credited.

Mr. Saunders began with the non-pulp magazine, Modern Mechanics, then went with the dell Publishing Company in 1934. By mid 1935 his output began to zoom towards that 75 to 100 per month average, with his works appearing everywhere, including on the cover od Popular Publications titles. Over the years his artwork appeared on so many pulp covers that it would be virtually impossible to make a complete listing of them. Among the titles were: Black Book Detective, A. Merritt's Fantasy, All-Story Detective, American Sky Devils, Capt. Hazzard, Detective Book, Dynamic Adventures, Dynamic Science Stories, Eerie Mysteries, Lone Wolf Detective, 15-Story Detective, Marvel Science Stories, New Mystery Adventures, Saucy Romantic Adventures, Ten Detective Aces, 10-Story Detective, Variety Detective, Variety Novels, Variety Story, Star Western, and many, many more.

After the pulps died, Norman Saunders continued his work for such magazines as Male, Adventure, Climax, Argosy, and others. And, he states that he has the distinction of having painted the covers for many last issues of pulp titles.

On the page below is a short, personal recollection of the artist's first dealings with Popular Publications. 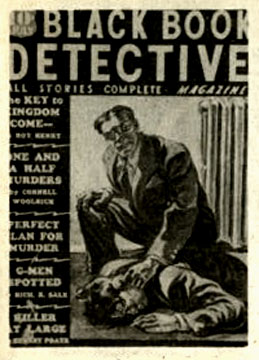 I first met Mr. Steeger, Publisher of Popular Publications, along with Mr. Goldsmith, in a very small, cluttered room that was Mr. Portegal's office - generally referred to as the "Art Department."

In the mid 1930s, aspiring artists and writers were not on a first name basis with publishers, nor for that matter, with art directors.

Having submitted a rough sketch for a magazine the previous week and received a tentative "OK," I had spent every waking hour painting on the cover design, and was at the moment unwrapping it for Mr. Portegal's approval, when into the crowded room came Mr. Steeger and Mr. Goldsmith.

The painting was propped up on a desk for general approval, and we all stood there; I squeezed as far out of the way as possible having already seen the picture.

Mr. Steeger was not one to waste much time in making a decision, and the decision was "NO", at which point I asked if maybe I could make some change in the painting which might improve it to the extent that it would be acceptable. Mr. Steeger arrived at another very quick decision -- "NO". The painting, as far as he was concerned, was beyond repair.

Mr. Goldsmith and Mr. Portegal didn't bother to arrive at any decision.

I explained that I had received an "OK" on my sketch and had worked the whole week on the finished painting, and now it was all for nothing. Mr. Steeger looked me square in the eye and said, "May I offer you a bit of advice?"

Not being in the position to refuse, and having received nothing alse for my week's labor, up to the moment, I nodded, and Mr. Steeger continued.

"In the future, don't put all your eggs in one basket."

I had previously heard that old bit of advice, but I thanked him for it, and said I'd keep it in mind. I wrapped my painting, took it over to Times' Square and sold it to Mr. Lincoln Hoffman, another Publisher.

I have only seen Mr. Steeger once since then, we passed in the elevator hallway. I don't believe he recognized me, for he didn't offer me any further advice.