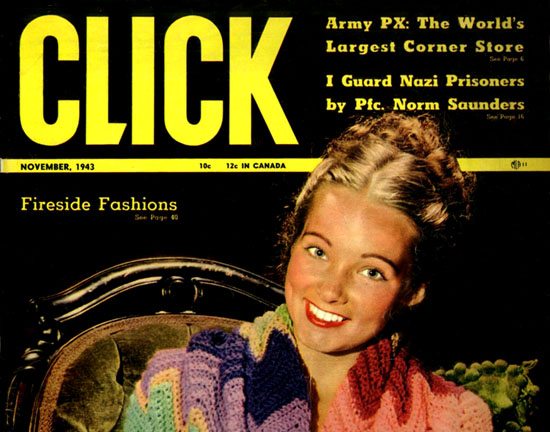 This is a cropped view of the upper half of the cover of CLICK Magazine from November 1943 issue, almost two years into the war. CLICK was a photo-pictorial magazine of contemporary events, similar in size and content to LIFE magazine. The featured article, "I Guard Nazi Prisoners", appeared on page 16, and was written and illustrated by Norman Saunders, then a Pfc. (Private First Class) in the U. S. Army MPs (Military Police).

This account of life aboard a U. S. train carrying Nazi prisoners to internment camps is an authentic bit of after-the-battle reporting by an Army MP who was a civilian artist. That his eye missed no telling detail is evident from both his first-person story below and his on-the-spot pencil sketches on these pages. - EDITOR

Until I was assigned as an Interior Guard on a Prisoner of War train, the only German soldiers I had seen were in newsreels and training films.

The thousands I have seen since then look and act much as the first 50 did. They are shorter than American soldiers by half a head or more, and they are younger - their ages vary from 15 to 40, but the majority appear to be 18 or 19. 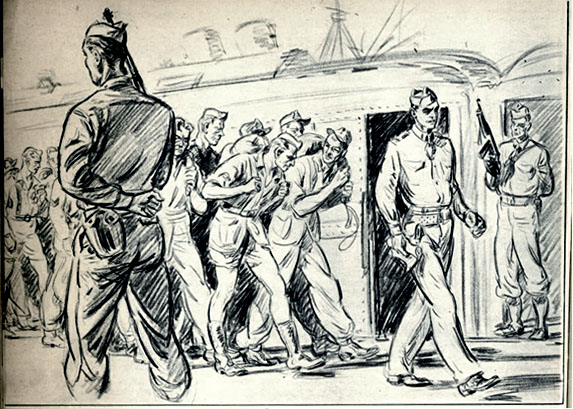 Once in the U.S., Axis prisoners are herded into trains bound for camps in interior. Uniforms are a motley of their own and allied armies'.

After being herded into a coach and placed three in a double seat, the first thing they look for is the water cooler. After Africa, they have little faith in any water supply.

And hungry! They're the hungriest lot I ever saw. At meal time, we bring bread. then potatoes, then meat, and next a salad or vegetables, with coffee last. Sauerkraut and frankfurters are a real treat to them, and ice cream just tops everything. They simply can't believe ice cream. 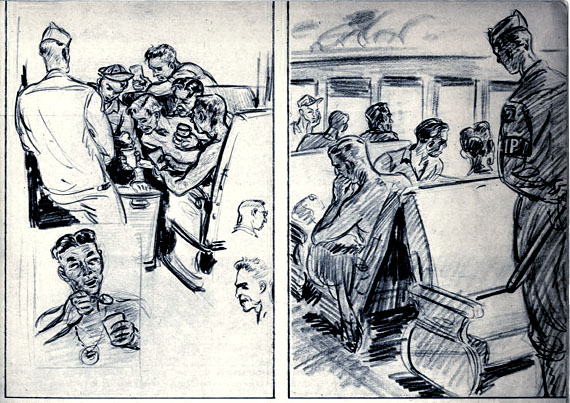 Nazi captives en route eat as if starved, They're crazy for ice cream. Each coach carries 50 prisoners. Only one may move about at a time.

Picnic plates and utensils amaze them, and they say "America must be kaput" - nothing left but paper plates. When we throw the dishes away, they are flabbergasted by our extravagance! After washing and shaving, they'll dry themselves with a dirty old towel day after day, rolling it up and restoring it to their packs. They never use the paper towels furnished them until we show them how.

Their craving for candy and chewing gum is as great as for cigarettes. They are allowed to smoke for 30 minutes after each meal. The miserliness with which they save butts speaks for the quality and quantity they are used to.