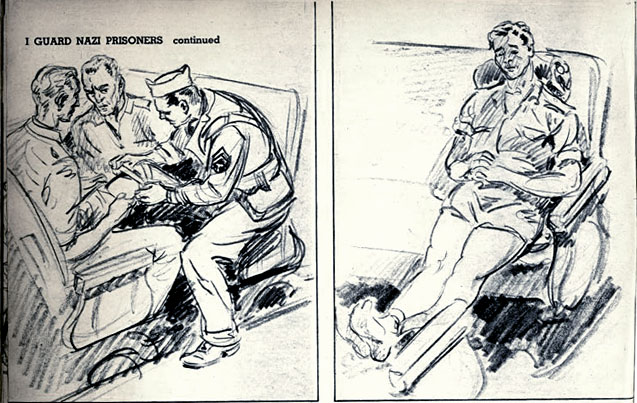 Wounds suffered before capture are dressed by U. S. medical officers. Artist Saunders titles this "A Goering Air-Borne Trooper is Grounded."

Constantly staring out the windows, Nazis lose confidence in Hitler's might as they pass countless war factories. Note the wooden stops permitting windows to provide ventilation but not means of escape. Quiet recreation is allowed. Here two Nazis play German army game similar to our chess.

The Nazis are extremely curious about America - they gaze out the windows constantly. Each train-load usually includes one or more Germans who were in the U.S. before the war - and some lived in Brooklyn. Twice I have been asked, "How're the Dodgers doing?"

These more-traveled Germans point out various towns to their fellow-captives. Those who have never been here before are most curious and eager to see Indians, cowboys, the Mississippi river, and Chicago. War plants along our routes are the real eye-openers to the Nazis - those factories blazing away as we travel across America day after day. At first the prisoners look with mere interest and curiosity, then they stare unbelievingly, and before we reach the camps they just sit dumbfounded at the train windows. They have lost their arrogance and are a lot quieter and not so sure that germany will win the war. 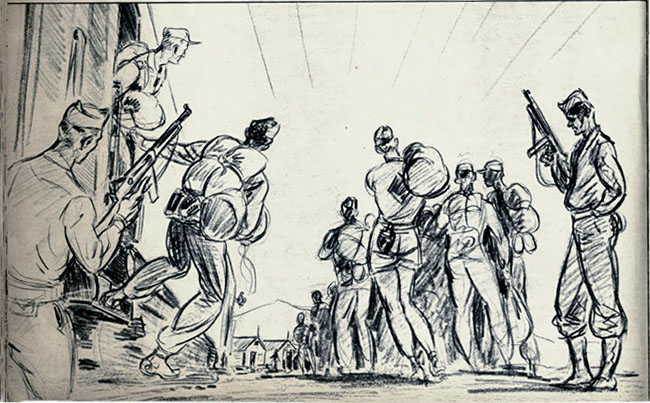